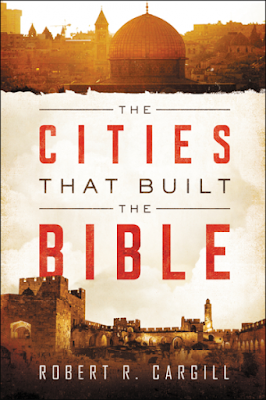 After reading The Cities That Built the Bible the first thought that went through my head was, gee I wish I read this book in seminary. Not only is this book chock full of information but information that I could have used years ago for my preaching and teaching. However, I guess it's better late than never! One thing for certain, I'm glad that I read this book!

The Cities That Built the Bible (Harper One, 2016) provides the reader with a tour of the important locations that are not only mentioned in the Scriptures but that helped form and shaped the Judeo-Christian texts, namely the Old and New Testaments. The author, Robert R. Cargill is an assistant professor of classics and religious studies at the University of Iowa and is the author of several books and many articles on various aspects of the early Christian world.

This book is not a dry boring historical book about ancient cities but a lively almost modern tour through the various locations that are important to the Bible: Nineveh, Babylon, Rome, Alexandria, Athens, Jerusalem, and others just to name a few. Cargill is a great tour guide as he gently leads his readers through the cities, villages, and towns that are important to Sacred Scripture. However, one of the most important things in the book is the historical and cultural world in which the Bible was written. In the opening pages he discusses the various deities, the gods and goddesses mentioned in the Old Testament and where they came from. He also mentions the many languages and language groups that helped shape and form ancient Hebrew and Greek as well as the land and the people from which the Bible was written and whose texts were read.

While reading this book I came across numerous factoids such as the following: that in the entire book of Jonah, we only have one statement from Jonah himself, the rest of the book is about Jonah, but not Jonah's words like we have in Isaiah or Ezekiel for example. While I've read the Book of Jonah many times the fact that Jonah only has one line in the entire four chapters surprised me. Now I'll have to go back and read the entire thing again in a new light.

If you are a serious student of Sacred Scripture and you want to know more about the culture, religion, and politics of the ancient Middle East and don't know where to turn, then go out and get a copy of The Cities That Built the Bible, not only will you learn something, you will certainly want to learn more. Cargill includes a lengthy Bibliography for those who want to dig deep into the sands of time to learn more about the people who wrote these very important texts. He also includes both color and black and white pictures of key places mentioned in the book and which are a very nice addition.