Me or God first??

The Christian life is not an easy path, there are days when I think, gee it would be much easier not to follow Jesus then to follow him!!! I feel like this when I get distracted and become irritable at those around me, get angry, or don't trust God. More often than not I think that I am the center of the universe rather than putting God in my center!
Oh well, I guess every day is a new day, a new beginning, a new chance to put one foot in front of the other trying to walk that life of faith.
Posted by Bill at 8:48 AM

Lately I have been reading a lot of poetry. Unlike prose and narrative, poetry slows you down, makes you savor and chew on every word. When reading a good page turning thriller or mystery it is easy to read fast skipping over words even, but not with poetry.
I have been reading several volumes of poetry by Mary Oliver. I came across this poem the other day and wanted to share, I hope you like it!
The Vast Ocean Begins Just Outside Our Church: The Eucharist
Something has happened
to the bread
and the wine
They have been blessed.
What now?
The body leans forward
to receive the gift
from the priest's hand,
then the chalice.
They are something else now
from what they were
before this began
or on the shore
just walking
beautiful man
and clearly
someone else
besides
On the hard days
I ask myself
if I ever will
Also there are times
my body whispers to me
that I have.
Posted by Bill at 5:11 AM

A Thought for Today

Book Review I Am Hutterite by Mary Ann Kirkby 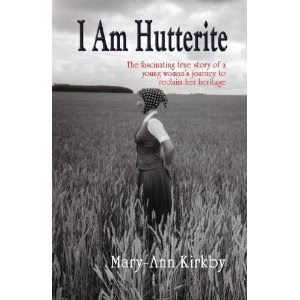 Once in a while a very interesting book comes across my desk and I Am Hutterite (Thomas Nelson, 2010) by Mary Ann Kirkby is one of them.
The Hutterites were a small Protestant break off group that appeared in 1528 in Moravia. They took the Book of Acts very seriously and decided to have a common life together and have everything in common; food, fellowship, and income. The Hutterites make the Amish look liberal!
The Hutterites left Europe and many of them found a new life in Western Canada and in the North-Central United States, North and South Dakota, Iowa. Mary-Ann Kirkby's book is part family history and part memoir telling the story of her family through the lens of daily life in a Hutterite commune. Life was very structured with everyone eating and praying together, working on the farm, working the land, mending, sewing, and building. Kirkby recalls that each commune had about 125 people, just enough people to work the land and to feed without being too cumbersome.
The cover of the book says that the book received an award in Canada and Publishers Weekly gave the book a strong endorsement. I found the book intriguing in that Kirkby manages to tell us her own story through the lens of the Hutterite community, but I found her own voice missing. There was no empathy or emotion between me and Mary Ann. Not only was the book a bit cumbersome with the many German words peppered throughout, but the book was written almost objectively, without real feeling. I almost felt like Mary Ann was writing from too far away, that there was very little of "her life" on the page but was telling the story from several generations removed. Maybe this was no fault of her own, but in the end I am glad that I read this book, not only does it fill a gap in modern religious history but Kirkby also included a recipe for a Sugar Pie which I want to try one day, it looks delicious!
To learn more about I Am Hutterite by Mary Ann Kirkby click here
To learn more about the Hutterite communities click here
Posted by Bill at 10:23 AM

A while ago I posted a short review of Judith Couchman's book, The Mystery of the Cross published by IVP Press. It is a wonderful read and a great resource for parish Bible study groups and or Christian book clubs.
You can find out more about Judith by clicking here
You can find out more about Mystery of the Cross by clicking here
Below is an interview that I recently had with Judith:
1. What inspired you to work on this particular book project, it is so unique, a combination of art history, theology, and Scripture? How did you manage to bring these three subjects together wholistically?
While working as a writer for years, I began studying art history just because I loved it. Then I decided to get a second master's degree in art history (I already had one in journalism) and studied online for it. I focused on Christian art. Especially as I studied early Christian andmedieval art, the visual representation of Christianity moved me deeply. It felt like viewing God at work in the world through images. It also intrigued me how, in a secular university classroom, I encountered Christian images and the beliefs related to them. The information spoke for itself, like a soft approach to sharing the faith.
While writing the book, I wasn't sure I was bringing art history, theology, and Scripture together wholistically. I wrote with hope and prayer. I thought the biblical and extra-biblical stories and beliefs offered context for the images. We can understand art better if we learn about its context. And always, readers want to know how ancient Christianity relates to their lives today. I wasn't sure if anyone else would benefit from the book, but the research affected me. Too often, the cross is just a common symbol to us. To the early Christians, it was everything. It represented their suffering Savior, the one who resuced them from sin. The one for whom they radically changed and sacrificed their lives.
2. Is there any particular chapter or chapters that are especially inspiring or memorable for you? Why?
Oh, yes. Chapter 9, The Descent from the Cross, touched me where I'd actually been living. That chapter relives how Joseph of Arimatheaand Nicodemus obtained and cared for Christ's body after his death. When my mother died, I helped prepare her body before the mortician took it. This was a loving, sacred act for me. A last chance to touch my mother and kiss her face. For the first time, I undestoodd the holiness of taking Christ's body down from the cross and preparing it for burial. I'd usually skipped that part when I thought about his death and resurrection.
Chapter 36, Desperately Seeking Sanctuary, also meant much to me. It described the ancient practice of sanctuary for those who'd committed crimes or fell into trouble. They ran to a church for sanctuary and received forgiveness through santuary laws. This practice is foreign to us; we want revenge. But the sanctuary laws and the cross's participation in them, exemplified God's forgiveness. It is broad, deep, wide, incomprehensible. I'm still trying to grasp the nature of such forgiveness.
3. What are some of the comments or feedback that you received from readers? I can imagine a lot of book clubs or small groups will be using this book for reading or devotional use.
Authors don't always know what's going on, unless people contact us. I'm no exception. But I do know the book has been discussed on blogs, taught in Sunday school classes, and read by churches for Lent. Readers have been complimentary about the content and the writing. I've worked hard to write decently, so good remarks about the writing cheer me. Some say they plan to read the book more than once. The book seems to be doing what I'd hoped: reaching into diverse Christian groups and bringing them closer to the Cross. I hope it's a book with a long life because the cross is a timeless topic. As the author, though, I think it's crucial to watch the book's progress with humility. It's really Christ's Cross that's speaking, not me. Whether the book sells a lot or a little, my responsibility is to follow God's call to write.
4. Has anyone, especially in the Protestant world, objected to the over use of Christian art or symbolism, especially the cross?
No, not so far. Instead, Protestants have been thrilled to read extra-biblical stories they hadn't heard before. I tried to write the book with a strong biblical foundation, in a way that Protestant, Catholic, and Orthodox Christians could appreciate it. I wanted the Scripture and the stories to minister to a broad range of Christians and possibly, spiritual seekers.
5. What are your future book projects? Any follow ups to this one?
I don't have a follow-up to The Mystery of the Cross, but I'd like to write one at some point. However, I just finished a book titled, The Art of Faith: A Guide to Understanding Christian Images (Paraclete). It releases in December of this year (2010). This book helps anyone interested in Christian art, from its beginnings through the Baroque era. You can read about the initial stirrings of Christian art; brief overviews of the Christian art eras; learn about common subjects in Christian art; understand its popular symbolism, and much more. The book is formatted so you can look at Christian art and consult the book for interpreting it. For every definition in the book, I've included, as an example, a work of art from somwhere in the world. And again, anyone can use it. You don't need a background in art or art history to understand and enjoy Christian art.
Posted by Bill at 5:21 AM

Just wanted to let you know some fresh reviews in about my book, A 30 Day Retreat, one from the UK and the other from New Zealand, check them out if you have time.
Available Light blog
Bishop Alan's blog
Later this week I'll have some more book reviews and other spiritual reflections, but for now, I'm back on track for blogging!!!!!
Posted by Bill at 2:11 AM