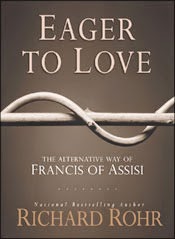 Father Richard Rohr is one of my recently favorite authors. A friend of mine suggested that I read two of his previous books, Immortal Diamond and Falling Upward. I read both in two days! They are great books for personal reflection, small group discussion, and for sermons. So when I saw his latest offering, Eager to Love: The Alternative Way of Francis of Assisi (Franciscan Media, 2014) I knew I had to read it too.

Father Richard Rohr is a Franciscan priest and the director of the Center for Action and Contemplation in New Mexico as well as the author of over twenty books on Christian spirituality. Do yourself a favor and if you have not read anything by Father Rohr yet go out and get a few books, you won't be disappointed.

Eager to Love certainly does not disappoint. In the every-so-noisy world in which we live it's hard to hear God's small gentle voice. Father Rohr recommend that we listen to God's voice in the Bible (this is always the best place to start!) but also through the words of St. Francis.

Eager to Love is not a biography of Francis. You are more than welcome to read one of those on your own. However the book is a primer on what I guess we could call Franciscan spirituality a spirituality of poverty of spirit and of continual love. The book is divided into thirteen chapters which are not too long as well as two appendices. Each chapter includes teachings of St. Francis as well as some good stories by Father Rohr. I found myself underlining almost every other sentence so I can go back and re-read and reflect on it for future sermons and teachings in the parish.

The sub title of the book is also meaningful since it is "the alternative way" of Francis. Francis was a reformer and in many ways a revolutionary and a reactionary towards what he considered an abomination of the institutional Church with all its money, materialism, power, control, and authority. Francis reminded folks that the Jesus way was the humble way, the poor way, the way of the neighbor and unconditional love and support. Many folks called Francis a fool because he walked around Assisi begging and wearing simple clothes and preaching a gospel of peace while the wealthy bishops and priests lived in mansions and ate gourmet food! Ironically in many ways the Church has not changed much. That is perhaps one of the reasons why the new pope, Pope Francis, is beloved by many, because he is a simple man who seems to live the life of Francis while at the same time serving as the spiritual head of the Catholic Church.

I've never met Father Rohr but judging from his simple writing style, singular thematic approach to the subject, and story telling abilities he must be a good preacher too! The one thing that shines throughout Eager to Love is the continual calling to question what it means to follow Jesus, especially those of us who are pastors. It's too easy to get sucked into the ways of the institutional Church that are often sinful and not worthy of Jesus. We fall into the trap of success in the eyes of the world (butts in the pews, bucks, and budgets) rather than on success in the eyes of God (love, mercy, and forgiveness). We tend to focus on rules rather than on love, on the proper protocol versus the person who stands right in front of us.

I could go on and on about Eager to Love, but I won't. I'll let you, the reader, see for yourself how the ancient words of a crazy foolish vagabond named Francis changed the Church and hopefully will help change us.

Go out and get yourself a copy of Eager to Love!

For more information about Eager to Love click here

Book Review: Fail: Finding Hope and Grace in the Midst of Ministry Failure

Why on earth you ask am I reviewing a book called Fail? Sounds strange, huh? Yes, you're right. It sounds more than strange it sounds crazy, insane, downright dumb even! Yet when I saw this new book on the InterVarsity Press website I couldn't wait to read it. Couldn't wait to read a book on failure? Yep. That's right, could-not-wait.

You're probably thinking that I should review a book on success, on growing bigger and better parishes, on budgets, bucks, and more backsides in the pew. Been there, done that. In the early years in ministry I thought that I had to be slick and savvy, do anything to get the folks in the door. The more folks in the congregation the bigger the collection. The bigger the collection, the bigger the budget. The bigger the budget the bigger and better buildings we can have, and on and on and on. Unfortunately this is the primary passion of many pastors these days. They focus on coffee and donuts, on good music, and on slick advertising and social media sites. However, the main reason for being a pastor is gone: Jesus.

JR Briggs knows a lot about failure because as many of us he did fail. He didn't have one of those huge fall from grace failures like some big name pastors have done, but he did fail. Not only did he fail in his parish but he felt like a failure on the home front too since he and his wife could not have children. I don't to give too much away about the book but I'll leave it to the reader to figure out the reset.

Fail (Downers Grove, InterVarsity Press, 2014) is a must read for all graduating seminary students and for young pastors. When I was reading I kept saying to myself, "Where was this book twenty years ago?" However I probably wouldn't have read it then anyway, I was too busy trying to succeed. But like Briggs I failed and failed and failed yet again, but I'm still in the saddle. Failure hurts as he says and many pastors can't take the pain and hurt that comes with failure. Pastors forget that in the eyes of the Romans Jesus was a big fat failure. He only had about twelve followers and even most of them were incompetent. Jesus requires us to be faithful not successful. Unfortunately we pastors got in wrong. Briggs tries to remind us that we shouldn't be afraid of failure, we actually should embrace it.

Briggs isn't preaching in the sense that he tells you what you should or should not do but he does guide the reader through the strange and mysterious labyrinth of when things go wrong in the pulpit. He weaves personal vignettes from his own ministry and from other pastors as well as biblical stories from both the Old and New Testaments to show the reader where he's headed. I really enjoyed the easy to read writing style combined with the biblical material. In many ways Fail is both a good read for experienced pastors like myself as well as a sort of text for a course in ministry or pastoral theology. The end of the book includes a very thorough resource section for further reading as well as a bunch of questions for reflection or small group discussion or for journaling. One of my tasks in the next two weeks is to go to a local cafe, order a large coffee, and do some journaling based on the questions that he includes in the end.

Many pastors get caught in the early days to prove oneself to the congregation, to the local district or judicatory, and to God. We do everything to show others how wonderful we are in the pulpit and the counseling room, in the hospital and the hospice. If we're lucky we'll fail along the way, if we're really lucky we'll fail big time so that we can learn to follow Jesus and embrace the cross. It is only the crucifixion of our egos that we can finally become the pastors that we were called to become in the first place.

I could go on and on about this book but I won't. I want to re-read portions of it and do some journaling when I have the time.

Do yourself a favor and buy yourself a copy of Fail. No. Better yet, by two copies and give one to a clergy friend. You won't be disappointed.