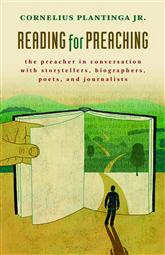 Every Sunday I have to prepare a sermon. For the first few years it was not that bad since I was preaching from the abundance of my recent knowledge at seminary. However, a few years into my pastorate I was having serious problems. Trying to prepare an inspirational, creative, encouraging, and thoughtful sermon every week is not easy! And it doesn't get easier with time either. After fourteen years in the parish it is still a challenge. I try not to repeat the stories that I use or recycle old sermons. Every week I draw on various life experiences as ways to explain the good news to the congregation. Reading has helped me tremendously. I read both wide and deep: novels, short stories, poetry, and some non-fiction. I read blog posts as well as the newspaper. Reading has helped my preaching and writing and the more that I read the better I become at both preaching and writing.

If you are a pastor and need inspiration for preaching than look no further. Cornelius Plantinga Jr has just written an excellent easy to read book about "reading" for preaching, hence its name Reading for Preaching: The Preacher in Conversation with Storytellers, Biographers, Poets, and Journalists (Grand Rapids, MI: Eerdmans, 2013)

This book is a must read for preachers. It is not really a how to manual but a series of thoughtful reflections on reading and literature. Basically Plantinga encourages preachers to read wide and deeply and to read all the time. Too often pastors are very busy, we have meetings, reports to write, sermons to prepare, parishioners to visit, and meetings to attend. Then of course they have their families to attend to as well as their own personal time. Many pastors complain that there is no time to read. However Plantinga says that even if you read five or six good books a year is better than nothing.

For more information about Reading for Preaching click here 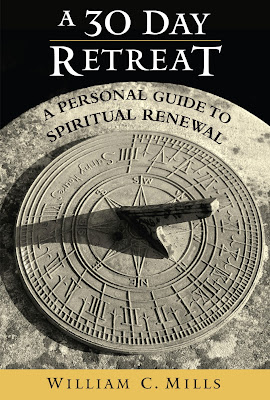 If you are in need of a spiritual retreat or renewal then look no further than my book, A 30 Day Retreat: A Personal Guide to Spiritual Renewal (Mahwah, NJ: Paulist Press, 2010).  It is now on Kindle where you have a 30 Day retreat at your fingertips.

Most folks can't take 30 days away at a retreat hour or cabin in the woods, so why not take a retreat with you. Each chapter has a series of "Food for Thought" questions for you to contemplate and think about. 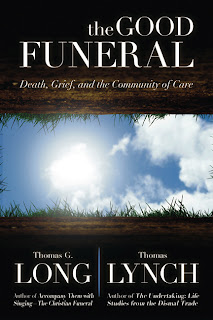 No one wants to talk about death these days, actually most folks want to avoid it. My dad always said that you can't avoid two things in this world son, death and taxes! How true. He also said don't bother saving up too much because you'll never see a U-haul hitched to a hearse. That's also very true. We live in a culture that avoids death. We don't like to visit hospitals or hospices. We skip funerals and go to a general memorial service instead. Our culture never really discusses death. We never see rows upon rows of military caskets on the tarmac after they arrived back in the United States. Basically we'd rather not talk about death at all. Recently a local hospital had a large advertising campaign replete with billboards and paid advertisements in the local paper that said, "Come to (hospital name), we cheat death!" Needless to say the public actually was upset and the hospital president was fired and so were a few of the trustees. Apparently even the general public who is often out to lunch when it comes to deep moral and ethical issues like this did not like the blatant disregard for a deeper, yet often not spoken about issue, such as death.

If we take the gospel and our faith seriously then we will certainly talk about death and mortality and sickness and suffering. It's a part of the human condition and central in the gospel too. Jesus warns his disciples that eventually he will be arrested, put on trial, mocked, and finally crucified. Yet they too, like us, don't want to talk about that, it's too dark and gruesome. Give us more life they say. Talk about the flowers of the field and the birds of the air, anything but death!

If you want to learn more about death, grief, suffering, and community care then you must read The Good Funeral: Death, Grief, and the Community of Care (Louisville, KY: Westminister John Knox, 2013). Written by two very well known authors, Thomas Long who serves as the Bandy Professor of Preaching at Candler School of Theology in Atlanta and Thomas Lynch a longtime funeral director and author of many essays, poems, and memoir. I have been lucky enough to have read some of Long and Lynch's previous work which I enjoyed very much so I was looking forward to reading there new co-authored book. This book is really full of wisdom, humor, and God honest truth about the world and culture of the funeral industry as well as caring for the grieving.

The Good Funeral really deserves a longer review which cannot be done here in this blog post but needless to say if you are a pastor or a layperson who wants to learn more about funerals and having a good death then read this book. Both Long and Lynch are insiders. They are not afraid to speak the truth about how we as a society have lost touch with death. While reading this book I was thinking about my grandparents and great-grandparents generation and how death must have been so prevalent in their world, especially during the times of World War I and World War II where many families were touched by death due to wars but also to sickness: the Spanish flu, pneumonia, typhoid, premature child death, heart attacks, and so forth. I can imagine that in small towns and villages death was very common, not to mention of course the death of farm animals in the more rural areas. This is contrasted of course with our modern culture where I have met many adults who well into their 30's have gone to maybe one or two funerals in their entire lives! Seventy years ago the odds would have been very different.

If anything The Good Funeral might start good conversations in our parishes and congregations about living wills, end of life issues, planning ones funeral and so forth. This book may give pastors a door way into a very hot and often "avoided" topic in parish life. A few years ago a parishioner who was a lawyer and I gave an evening presentation at our parish about end of life issues and caring for the dead. People were very open to this sort of thing. They wanted to learn some of the ins and outs of the funeral service and funeral planning as well as how to obtain a living will and regular will. They wanted to learn more about helping the grieving and mourning. Hopefully The Good Death will spawn more conversations like the one we had in our parish about death.

For more information about The Good Funeral click here