Book Review: You Are the Messiah 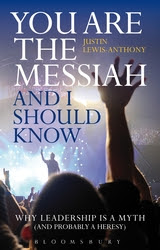 When I heard that Justin Lewis-Anthony had a new book coming out this Spring I new I had to read it right away! I read his previous book If You Meet George Herbert on the Road, Kill Him: Radically Re-thinking Priestly Ministry (London: Mowbray, 2009). There are few theological books that make one laugh and this one did. Serving as an ordained priest in the Anglican Church has provided Lewis-Anthony with plenty of material to work with, especially when it pertains to the parish, clergy, and the Church at large. After reading If You Meet George Herbert I told all my clergy friends about it.

Lewis-Anthony's new book, You Are the Messiah is an exploration of the concept of leadership as it pertains to the Church. Anyone who has spent enough time in parish life has encountered the word leadership, or leadership development, or leadership skills. It seems like every year diocesan administrations want to help train clergy for "better leadership skills." My hunch is that Lewis-Anthony, like myself, was tired of hearing so much about leadership that he wanted to write a book about it.

I cannot devote the time needed for a longer review, hopefully a theological journal will do that. However, I do want to provide at least a summary of the book for you to at least consider reading it yourself.

The book is divided into three parts: Leadership is a Myth, the Myths, and Domination and discipleship. This book is not a page turner and nor is it merely just a theological exposition on leadership. Lewis-Anthony also includes plenty of examples from both the silver screen as well as popular culture as to show how leadership, especially heroic type leadership (aka General Patton, John Wayne, etc..) has provided a false image of leadership for those of us in the pews and in the parish. While I found his main thesis very strong I did get lost in the longer second section which really deals with film and film history as well as an excursus into main leadership issues. However I really enjoyed the first and last section when he shows how Jesus provides a very different image of leadership; one of humility, meekness, lowliness, and sacrifice, skills that are certainly not encouraged, taught, or discussed in MBA programs or in the business world.

Basically Lewis-Anthony shows that the Church has really adopted a very bad and even heretical notion of leadership from our culture at large. Bishops and priests cannot be leaders like George Patton and John Wayne, although unfortunately some do, and it often backfires on them! The image of Jesus and also Paul is that of counter-leadership really. When reading You Are the Messiah I really wish Lewis-Anthony explored this more in the last section. He has some really cogent and important things to say about this subject yet he sort of cut it short. He pulls no punches either. What makes Lewis-Anthony's writings and ideas so fresh is that he is radically honest and truthful. Too often our bishops and clergy leaders, even seminary professors, tiptoe through the tulips ignoring or downplaying the real problems and issues in ecclesial life, focusing the annual clergy gathering on "bucks and butts" (i.e. bette income and people in the pew), or clergy development (whatever that means!!), and better administration (again, huh?). It's almost always easier to have ones head in the sand rather than to hit head on the cares and concerns of the day. Perhaps he will be working on a future volume dealing with the image of Jesus and Paul as leaders, teasing out the gospel and epistle lessons which really are great examples for clergy; here I think of John 10 and 12, Romans 10, Matthew 25, and so forth.

For more information about You Are the Messiah click here 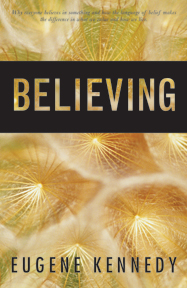 Just have faith. Yea right. Easier said than done. The word faith means trust as in if you trust someone very deeply. Faith is like walking in the dark putting one foot in front of the other hoping that you will keep going forward. Faith is the story of the Israelites wandering around in the desert for forty years not knowing whether or not they'll get the promised land, but they kept going anyway. Faith is tricky. It is also a life-long process too.

In his new book called Believing (Maryknoll, NY: Orbis Books, 2013), Eugene Kennedy takes up the mantle of faith and creates an extended essay of sorts on this notion of faith and belief. Kennedy is a professor emeritus from Loyola University in Chicago and the author of over fifty books in psychology and religion and has won many awards as well.

Believing is organized around nine chapters, each taking up a different aspect of faith such as incarnational faith, doubting, creative faith, and faith and life.

After reading this book one is left with more questions than answers, something which Kennedy notes is not a bad thing. A healthy dose of doubt is actually good for us! He warns us about people who think that they have all the answers, they are filled with hubris! Unfortunately the institutional Church, which also comes up from time to time in this book, often does seem to have all the answers to our questions and leaves little room for doubt. Doubt says Kennedy, allows humans to grow and expand and keep asking questions which propels us forward. Doubt is not bad, it just is what it is. He mentions that one of the major problems with the institutional Church is that it has not left enough room for doubters, people like theologians, artists, writers, poets who keep pushing the limits of knowledge. Very often these people are pushed aside and their voices are not heard. Kennedy calls for a new and vigorous support of these people since it is this creativity that is needed now more than ever.

Believing is a book which is short enough to read in a few hours but a book which will make you think for several weeks! It seems when we read the gospels for examples Jesus more often than not does not answer every question but he actually answers by asking a question himself, passing the ball into the inquirers court. If Jesus himself does not answer all questions why should be think different.

If you are interested in faith and the many aspects of it than read Kennedy's new book, you might leave scratching your head in the end and that's okay too, it just shows that you are a thinking person.