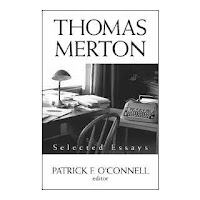 For those who enjoy the writings of Thomas Merton the new anthology edited by Patrick F. O' Connell is a must read. Recently published by Orbis Books, Thomas Merton: Selected Essays is a sampling of the numerous essays which Merton wrote. Patrick F. O'Connell is a professor of English and theology at Gannon University in Erie, PA as well as the founding member and former president of the International Thomas Merton Society.

I first encountered Thomas Merton in college. While browsing the theology shelves in a used bookstore I came across a small blue book called Contemplative Prayer. I read it so much the pages became well worn. After reading that book I read some of his other books and then his biography. Merton was certainly prolific writing not only monographs but also many book reviews and essays as well. This new collection is a sampling of thirty three of his essays which range from topics such as the theology of paradise to a loving tribute to Gandhi as well as the role of contemplation in the modern world and the relationship between Christianity and Zen.

The word "essay" comes from the French word "essayer" which means to try or to attempt, particularly to attempt at exploring some topic or issue. These essays reveal Merton's attempt at exploring the many important issues of his day. Each of the essays includes a short introduction, explaining where the essay was first published and if it was previously anthologized and where it appeared.

What is nice about this book is that you can read one or two of the essays and then take some time to reflect upon them and then move on. In that way they are like Zen koans, a statement is read and then you go away thinking about it for a while. Merton had that unique gift of getting right at the topic at hand without including too much minutae, he wanted to get at the hear of the matter. It's amazing that while these essays were written over forty years ago they are still very appropos to our day and age.

Thomas Merton: Selected Essays also includes a short introduction by Brother Patrick Hart, Merton's former secretary as well as an appendix of his essays in chronological order for those who wish to explore more of Merton's writings. 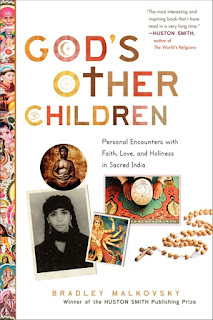 As a priest in the Southeast United States I meet all sorts of people from a variety of backgrounds, especially religious backgrounds. However most of my contact has been with a variety of Christian backgrounds, i.e Methodist, Baptist, Disciples of Christ, and so forth. Occasionally I'll meet an agnostic but that's pretty much it. My contact with Hindu's, Jews, Muslim's, Buddhists, Sikh's, and persons from other Eastern religions is limited to non-existent. However it was not always this way. When I lived in New Jersey I met many people from a variety of religious backgrounds; most of my friends were Jews and my parents worked with a few people who were Muslims.

For those people who know little about non Christian religions, and especially Eastern religions then this book is for you. God's Other Children: Personal Encounters with Faith, Love, and Holiness (NY: Harper One, 2013) is not a textbook nor a survey but a book regarding Bradley Malkovsky's experience with faith, love, and holiness in India. Malkovsky, a practicing Roman Catholic, actually married an Indian woman who was Muslim who eventually converted to Catholicism. This book is an intriguing exploration of how people from different faiths work, live, and exist together in a very big and multi-ethnic country. Malkovsky also is an expert in Eastern religions and teaches in the Theology Department at The University of Notre Dame.

Divided into twenty chapters, God's Other Children, takes the reader away from our comfort zones in the Western world and plops us down in India. I have never been to India but I have met several people who were from there and they all tell me if you want to learn about religions then go to India! You will find almost everything there! Indeed, from what I gather from God's Other Children, India seems like a religious mall for seekers. In one city you may find a Catholic Church down the street from a Sikh Temple or Buddhist shrine. You may come across a religious procession or other type of religious activity.

What makes God's Other Children intriguing and interesting is the personal touch that Malkovsky provides his readers. This book could have easily been an academic or theological exploration of India but it is not. Rather Malkovsky weaves personal vignettes from his own stay in India, studying at various ashrams, learning Sanskrit, living on his own, and also eventually dating and marrying a local girl from a village. God's Other Children is Huston Smith meets Elizabeth Gilbert I guess! I also found Malkovsky's writing very down to earth, he often would pepper the narrative with words and terms in their original language but then translate them for the lay reader. Most of the time we live in a religious bubble. If we are regular Churchgoers we may know very little about our Hindu or Muslim neighbors down the street and vice versa. I think the more we get to know one another the better we will be.

If you are interested in religion in general and the various religions of India in particular then take and read God's Other Children.