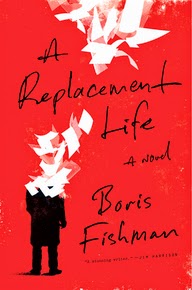 If you are looking for a laugh out loud, funny, yet endearing book for this summer then look no further than Boris Fishman's debut novel A Replacement Life (Harper, 2014). I guarantee you'll laugh a lot, if not, somethings wrong with you!

Fishman was born in Belarus and immigrated to the United States as a child. He is the editor of Wild East: Stories from the Last Frontier and his work has appeared in many noteworthy outlets such as New York Times Magazine as well as the London Review of Books. This is his first, but hopefully not last, novel.

A Replacement Life takes place mostly in Brooklyn New York in a Russian Jewish community. The main character Slava, is a fact checker at a booming and widely popular magazine called Century. He desperately wants to have a "real" article published one day but keeps on getting rejected. His whole career revolves around checking facts in  other articles written and published by his colleagues. Readers of Tom Rachman's first book The Imperfectionists will see similarities here, both very real and both extremely funny.

As Slava slods through article after article at work, word gets around the Jewish community that the German government is giving away money for victims who suffered in the Holocaust.  Slava is asked to write suffering narratives for "victims." Needless to say not all of these colorful victims suffered directly in the Holocaust, some, such as Slava's grandfather suffered in Uzbekistan! What is intriguing here is the tension between fact and fiction and how far one goes with it. Did all these characters suffer in some way? Yes. Did they all survive the war? Yes. Were all Jewish? Yes. But not all suffered directly in Nazi Germany. Does living in the diaspora, being forced out of ones home fall under suffering? Does living in a makeshift homeless shelter for a while fall under suffering? Where does one draw the lines around suffering, especially in war? Who is to say that having to move to Uzbekistan shouldn't be considered suffering?

Fishman is a wonderful writer. He has a keen eye for detail, colors, sounds, and shapes. There is one seen where Slava is invited to dinner and Fishman describes the meal as food after food is coming on the table, it took my breath away. Having lived among Eastern European Jews and worked with them as well, I know very well the culture, language styles (accents included!), and religion and Fishman describes all of it perfectly without getting into cliche.

The other important theme in A Replacement Life is faith. Slava and his grandfather are cultural Jews. After the war some Jews lost their faith in God and either became atheists or cultural Jews, Jews who  observed Passover or Hannukah but that's about it. Slava however finds himself caught up in a relationship with someone who is more of a believer than he. He questions his own faith just as he questions whether or not his cousins and neighbors suffered in the Holocaust. There is one touching scene when an older man named Israel walks to the local synagogue every once in a while just to light a candle and say a prayer for his son who returned to Israel to make aliyah. Israel is not that religious, but his son has become a Hasid with all of the trappings of the black fedora, coat, and long hair locks. This of course bothers Israel yet he still loves his son dearly.

Throughout the novel Fishman creates a continuous tension regarding immigration, identity, faith, community, and justice. He also creates a tension between truth, truth(s), and half-truths, as Slava tries to seek the "ultimate truth, "which of course he never can.

Barnes and Noble has made A Replacement Life one of their Discover New Writers Books. I hope you all can discover the joy of reading this book. I earnestly look forward to Fishman's second novel. Hopefully it will be both a page turner and as funny as his first one!