Book Review: All Who Go Do Not Return 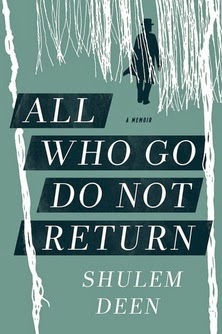 You might be wondering why is an Eastern Orthodox priest is reviewing a memoir about a former Hasidic Jew? Well for starters I grew up in a very Jewish world in New Jersey. Many of my school age friends were Jews, my mom's boss was an Orthodox Jew, I worked part time in high school for a brother and sister who survived concentration camps in Germany, and for a time I wish that I was Jewish too, especially around Chanukah. I was super jealous when us Christians only had one day of gift giving at Christmas where my neighbor friends had eight days! Since we had so many Jewish believers in our community my local school always had off on Yom Kippur and Rosh Hashanah. So it made perfect sense that I would read and devour Shulem Deen's new memoir (Graywolf Press, 2015)

Deen was a former member of the Skver Hasidic group based in Monsey New York, which is around thirty miles or so north of New York City up in Rockland County. There are many branches of the Hasidic community each involving various small cultural and theological nuances which usually include following their beloved Rabbi or Rebbe as they call him. The Rabbi is not just the main spiritual leader but the one who leads prayers, teaches, and upholds Jewish law. The Skver Hasidic dynasty originated with the teachings of Rebbe Yitzhok Twerski who lived in the Ukraine. Upon coming to the United States the Skver Hasids established New Square, New York as their home base, not too far from other Hasidic Jewish groups.

Anyone familiar with Hasidic Judaism knows that they generally live in tight closed knit communities where they live, eat, study, and pray together. Many own stores and shops in the community and in some ways their life is not too different than the Amish who live in Lancaster Pennsylvania  and who have very little contact with the world around them: i.e no televisions, radios, computers, movies, secular books, or newspapers. Their life revolves around prayer, study, marriage, and family. Like the Amish, many of the Hasidic Jews do not receive public education and therefore many do not have basic life skills such as reading and writing in English as well as little advanced math comprehension.

Deen's memoir is a heart wrenching story of a young married Hasidic man with children who after a long period of soul searching and discernment decided to leave New Square. Leaving any community is not easy, but leaving the Hasidic community seems nearly impossible. Deen was considered an "aprikoros" or heretic by the local Jewish leaders. He was banned, sent away as someone who would contaminate the rest of the community. This story is heart felt because as we know that life is never cut and dry, one has many connections, friendships, and networks within a community and to leave family, friends, and faith is horrific especially when someone is raised in that particular faith tradition. To leave what you know, what is familiar to you, all of the customs both big and small is not so easy as it seems.

There are many memoirs where the writing is thin and the story bland. Not this one. Deen's writing is like reading a piece of artwork. He provides the reader with the many sides of Hasidism, the good, the bad, and the ugly. He shows the warts and wrinkles the joys and the pains as well. For example of all the people mentioned in the book, it seems like his siblings still continue to love and care for him even though he left. As I was reading it dawned on me how painful it must have been for them as well. I also thought about his friends who stayed at New Square. How do they feel about his leaving? Are they jealous? Do they feel, like Deen, caught between staying and leaving?

As someone such as myself who is steeped in a robust liturgical and ancient faith tradition as the Eastern Orthodox Church I felt much sympathy and affinity with Deen's faith struggle. We too can often be very sectarian, afraid of secular books and culture, afraid of asking questions, afraid of challenging the saints and the Fathers of the Church (ancient sermons and theological writings of monks, bishops, and priests), but accept everything without questioning. More often than not what is left is a very thin faith and one that is one of fear of power and authority and not based on love. Many clergy, like the Rebbe's mentioned in the book fall into the trap of dominating power and authority in the parishes. Once I was asked by a parishioner to actually name her child. It is one thing to bless a child on the eighth day which is our custom, but she wanted me to provide the actual name, as if she was giving over all power to me. I firmly suggested that this was a decision that needs to be made between herself and her husband. She pushed the issue and I remained firm. I was not assuming that responsibility for her. Long story short it is not uncommon for believers to project things onto me as their spiritual leader and guide which is not really my responsibility. Things are similar in Hasidic Judaism where followers will hang on every word and teaching of their Rebbe, so much so as to push and shove one another as he enters a room so that they can touch him or receive a blessing.

I had difficulty reading this memoir, not because of the narrative or the quality of the writing, but because I saw in it the destructive power of religion. I wondered what if Deen was raised in a different type of Hasidic group, one that allowed for discussions, for questions, for a slightly different lifestyle? How different this life might have been! There is much in Judaism that is beautiful. I often listen to Jewish hymns on the internet and read selections from some of the great Hasidic spiritual writers such as the Baal Shem Tov as well as the more contemporary Abraham Joshua Heschel whose writing and life I admire very much.

Religion can easily turn into sectarianism and fundamentalism. Those who challenge or call to question are shoved to the margins and are either pushed out or are asked to leave. How sad. Judaism has a rich and lively heritage which in some ways parallels Christianity with its various rites, rituals, hymns, prayers, and food. Yet sometimes we can easily be imprisoned in these rites and rituals, very often not knowing why we do them, but wondering can they be done in a slightly different manner which is more appropriate for our time and place.

I could go on and on about Deen's memoir but I won't. I'll leave it up to you, the reader, to take and read. I commend Shulem Deen for his courage and humility to write this book. It must have been a labor of love. I know he touched my heart.


For more information about Shulem Deen and his memoir click here