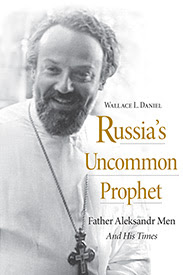 I first heard of Father Alexandr Men when I was studying at St. Vladimir's Seminary back in the late 1990's. A few of his sermon collections circulated around the seminary bookstore and in the library, but since I was busy with studies I didn't have much free time for extra reading. I wish I did since Fr. Men is a very important figure in the modern Orthodox world. His sermons, articles, essays, and books have been translated from Russian into English as well as numerous other languages.

Prof. Wallace Daniel, Distinguished Professor of History at Mercer University, has written a very good biography of Fr. Men. Daniel is the author of several books on Russian history and culture, The Orthodox Church and Civil Society in Russia as well as coeditor of Perspectives on Church-State Relations in Russia. I'm sure that his new biography on Men will be read as the definitive biography for some time, it is that good.

Fr. Men was important for many reasons. First and foremost, as the title states, he was a prophetic figure during the Soviet era. He lived during a time of great oppression to the Church, many churches, seminaries, chapels, and monasteries were closed, few clergy serviced parishes, and the laity were ill-educated in basic Church teachings and doctrine. Unlike many pastors, Fr. Men preached the gospel using basic easy to understand language, held secret adult education classes in apartments, and circulated sermons and articles through copying them via a xerox machine and circulating them among his congregation and among friends, what they used to call samizdat. Secondly, he reminded people that there was more to life than this world, more to life in Christ than merely working and serving the Soviet state; he spoke about love, relationship, family, connections; about the role and importance of poetry and literature, music, and art. In many ways Men was a renaissance man.

It was because Men couldn't be controlled by either the Church, which at that time was still very conservative and in some ways controlled or influenced by the Soviet leaders, or by the government which pressured him to stop preaching; that he was mysteriously killed on September 9, 1990 as he left his house to walk a few blocks to the train station.

One of the reasons why this book is so good is that Daniel doesn't merely explain Men through his own writing but describes Men in his own context during a very tumultuous time in Church history. Russian Orthodoxy had a very long and illustrious history in Russia but the Church and its leaders suffered greatly during communism. Daniel highlights Men's contributions as a watershed moment since not too long after Men died Premier Gorbachev rose to power, opening the floodgates and allowing more freedoms in Russia. This book serves as both a mini history of the Russian Orthodox Church in the 20th century as well as a biography of a very important Church figure.

If you are interested specifically in the writings of Fr. Men or in modern Orthodox Church history then Uncommon Prophet by Wallace Daniel is for you.